An Orgasm in Every Pill ... Maybe

So, now we not only have to deal with the media telling us we are only acceptable as women if we look like an airbrushed cover model, but the pharmaceutical industry is now conspiring with doctors to create the phenomena of Female Sexual Dysfunction (FSD)?  Misinformation is spreading like wildfire, thanks in part to my favorite bastion of false idols--Oprah, and companies are desperately trying to convince women that they can give them orgasms if they just take this pill. Or that cream. Or this patch.

Don't worry, it's all perfectly safe. And even if it isn't totally, it's worth the risk because you are diseased with FSD. Don't believe me? Here, ask this doctor that we in no way compensated to endorse us.

Bullshit! Do you know what the drug trials proved time and time over?

The majority of women cannot achieve orgasms through intercourse. And out of the few who can, only 25% are able to achieve one consistently through intercourse. (Psychology Today, http://www.psychologytoday.com/blog/all-about-sex/200903/the-most-important-sexual-statistic). The interesting thing to note, then, is that this is not something our bodies are necessarily designed to do. Not orgasming via intercourse is NORMAL. So no pill, patch or cream is going to create enough of a physiological change to make us start coming the second a man puts his penis in our vaginas. Or even if he lasts all night; which would chafe anyway so men should really stop acting like we give a shit about that.

What we really need are men or women who help us establish a relationship built on trust, mutual respect and understanding of how to meet our needs in, and especially out of, the bedroom. Having a partner who helps with the household chores or gives us the freedom to be ourselves is far more of a turn on than a large penis. Someone who will explore our bodies with us, who we can learn together what brings us to climax, is far more likely to bring us to orgasm than taking a pill to impact our hormones. And a man/woman who knows how to use his/her tongue?

I have previously espoused the importance of being a whore with your mate, as well as the over-diagnosing of ED and prescribing of Viagra. This is just one more attack by an industry desperate to get our money and the capitulating by a culture increasingly dependent on a quick fix. If you are a woman and unable to orgasm, don't go to your doctor and ask for a pill. Be smarter than that. Educate yourself on your body and reach an orgasm with your hand or a toy. Then invite your partner, if you currently have one, to be part of your education. My fiance greatly enjoys using toys on me (although I do use that as a punishment at times for when he's not allowed to taste me or touch himself), and one of his greatest joys is bringing me to climax with his tongue.

And for goddess' sake, put the pills down. 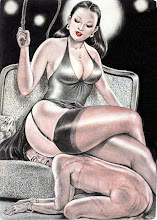 Hall of Douchebaggery - Trolls who ignore my bio and hit on me.